The differential amplifier has the ability to suppress signals co mmon to the two inputs.
CMRR is an indicator of the ability.

When a commercial power supply signal ( In) flows to the ground loop, a noise ( Vn) is generated and applied to the inputs of the differential amplifier as an common mode component. However, the common-mode noise component appearing at the output of the amplifier is extremely small (the common mode gain is small, ideally zero). When Adiff is the differential gain (the gain with respect to Vs in the Fig. 1) and Acom is the common mode gain (the gain with respect to Vn in the figure), CMRR is defined by the following equation. 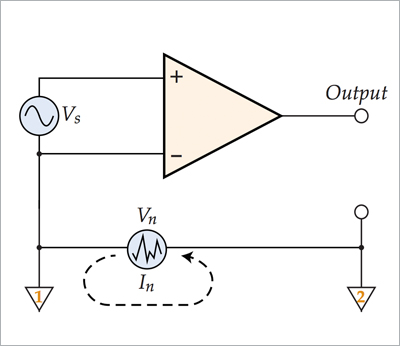 For example, NF differential amplifier 5307 CMRR is 120 dB (min.) at utility frequency. Even if 1 V is generated as the noise component Vn, only 1 μV appears at the output. As the system is larger, since the potential and impedance are different, a ground loop current flows between 1 and 2 (refer to Fig.1), then it generates noise, even though 1 and 2 look the same.

In the Actual Setup