The bias condition is temperature dependant. To solve this problem, inserting a resistor in the emitter of the input transistor is a solution, but that resistor would generate noise. The bias stabilization technology can stabilize the bias without using the resistor.
Fig. 1 shows the basic ampliﬁcation circuitry of SA-230F5. By DC servo of a diﬀerential integrator, the collector current Ic of the input transistor is IC = VREF / RC.
The transconductance gm of the circuit in Fig. 1 is

Where k is the Boltzmann constant, q is the elementary charge, and T is the absolute temperature.
Gain A is

Then, it will not be temperature dependant. 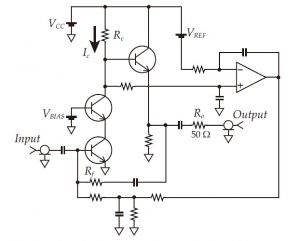 The active input impedance can be matched in a wide frequency range rather than at a point in conjugate matching. In addition, the noise ﬁgure which could be up to 3 dB by a termination resistor, can be less than 3 dB.

The input impedance of the circuit whose input and output of the inverting ampliﬁer are connected by resistor Rf as shown in Fig. 2 can be calculated as Zin = Rf / (1 + A).
This value depends on the gain.

Because a stable gain can be achieved by the bias stabilization technology mentioned above, the stable input impedance can be kept.

Utilizing these two technologies, the SA-230F5 achieves ultra low-noise characteristics in a wide range as shown in Fig 3.