Generally, the preamplifier used for small signal measurements needs to be low-noise. Ideally, we would want a preamplifier with zero noise; although in reality, the amplifier generate noise from inside and it’s normally superimposed on the output signal.
One of the important specifications of the preamplifier is the equivalent input noise density, which converts the internally generated noise into the input noise. Thus, a preamplifier with low noise density can normally amplify signals with very low noise.
NF offers the SA series of lose-noise preamplifiers with various specifications. And among the SA series, the model SA-230F5 has the lowest equivalent input noise voltage density. (Figure. 1) 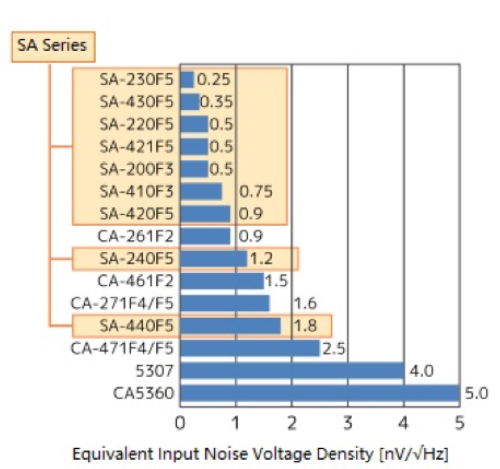 The input impedance of the model SA-230F5 is 50Ω, and the Johnson-Nyguist noise of a 50Ω resistance at room temperature is 0.91 nV/√Hz. However, the equivalent input noise voltage density is 0.25 nV / √ Hz, which is even lower than the thermal noise (Johnson-Nyguist Noise) generated by the 50Ω resistor (Figure.2) 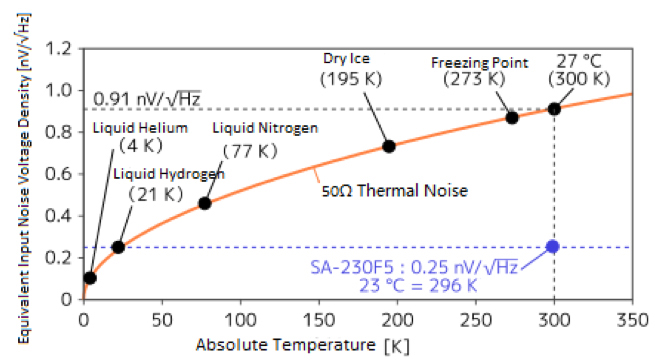 The existence of low noise preamplifier could become a reality was because of NF’s original and unique circuit design and technology.

A 50Ω resistor connected to a typical preamplifier with a 50Ω input impedance is shown as below. (Figure.3(a)) The Johnson-Nyguist noise generated by the resistor is amplified by the gain Av and then output as output noise. However, the model SA-230F5 doesn’t use resistors in the input circuit design. The input negative feedback circuit can operate as if there’s a 50Ω of resistor used at the input.(Figure.3(b))

The input circuit still operates the same for both the circuit with a 50Ω resistor connected or the negative feedback circuit. And this technology is called active input impedance.